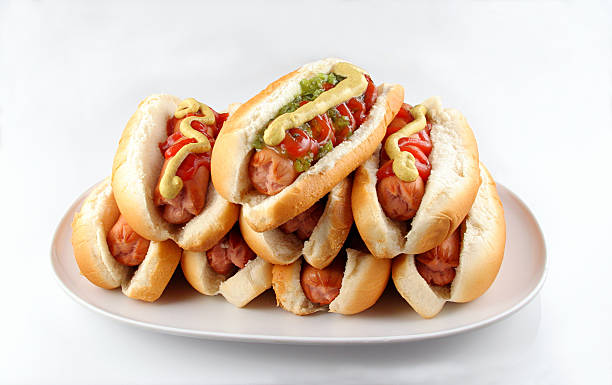 A man and his servants came to see Rabban Gamliel and his court. The man had his servants bring forth an enormous platter of the famous sausages of the great shochet Nathan, each resting in a half-split bun with mustard. The court salivated in anticipation.

"I have a question about the law," demanded the man. "I must know: 'what is the difference between a sandwich and a taco'? These nakniks (hot dogs) in buns: are they sandwiches or tacos? I must know so that I may properly observe the mitzvah of Taco Tuesday."

The Rabban gestured his rabbis forward, and declaimed, "On this matter there are many truths. Some hold it that, to be a sandwich, a dish must have two separate starchy objects with a filling between them. In the views of those, the nakniks are therefore tacos. What say you, Rabbi Yehoshua?"

Rabbi Yehoshua came forward, gestured at the hot dogs, and said, "I have never held with the view that a single bread makes a taco. For not only would the naknik be a a taco, but so would a lobster roll, as well as a felafel. Instead, I hold with those who say that what defines a sandwich is the bread. Sandwiches have leavened bread, whether it is in two slices, split, or folded. Tacos are made from unleavened flatbread. Therefore the nakniks are sandwiches, for they rest on leavened bread."

Rabbi Dosa ben Hyrcanus objected, "But would that not then make Passover the holiday of no sandwiches, because all breads are unleavened? Even the famous sandwich of Rabban Hillel?"

Rabbi Yehoshua replied, "The Almightly makes the exception, because only on Passover is unleavend matzah considered bread. 'This is the bread of our affliction', says the Seder."

"Neither of these tests are in accordance with my reading of The Book of Noshing," said Rabbi Dosa. "Does not the verse say 'You shall SPLIT the loaf of rye, and fill it with pastrami, but never with mayonnaise'? It is not the bread, or whether there are one or two pieces, that make a sandwich, but the act of splitting, slicing, or tearing the bread. Nakniks are therefore sandwiches, but only because the bread is cut, just as the matzoh for a Hillel sandwich is torn."

"But what of the felafel? Then a felafel where the pita was folded would be a taco, but one where the pocket is torn open would be a sandwich, which would be ridiculous," objected Rabbi Yehoshua, who then turned. "What say you, Rabbi Akiva?"

But Rabbi Akiva only belched loudly as an ox, for he had spent the entire argument eating all the hot dogs.