Yes, it's vegan -- yet it's fairly traditional, absolutely delicious, packed with vitamins, and even quick enough to make on a weeknight. Gumbo z'herbes is the gumbo that Creole folks have traditionally eaten on Good Friday, and sometimes on other days during Lent, so it isn't supposed to contain meat or seafood.

The Gumbo Shop in the French Quarter serves this, and were kind enough to share their recipe. It's really the best gumbo they serve, and that's saying something. A while back their chef realized that it would only take a couple of tweaks to make a traditional gumbo z'herbes recipe actually vegetarian, or even vegan, so that's what he did.

Yes, I realize this is a bit late for you to use the recipe for Mardi Gras, but print it out anyway and you can celebrate with it on the weekend. It's good enough that you don't have to be vegetarian to love it.

Now, this gumbo does depend on a few specialty ingredients, plus a bunch of steps to build up flavor. Don't skip or substitute these beyond the suggestions I make below; if you start cutting things from the recipe you'll ruin it. Yes, it does really need that much oil, and that many spices. 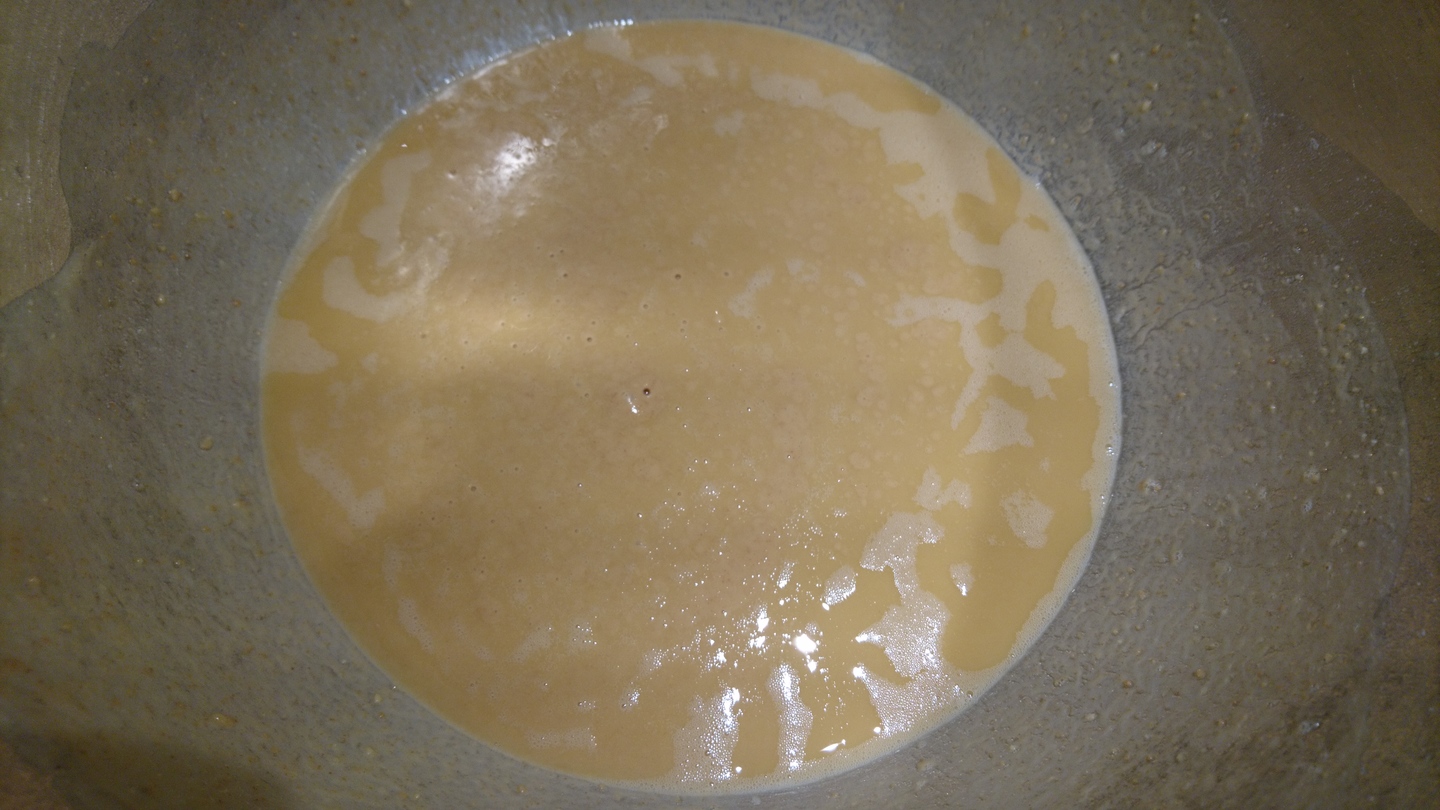 Like any gumbo, the first step is making a roux, made by the simple practice of stirring a bunch of flour into a startling about of oil. If doing a non-vegan version of this, you can swap out half the oil for butter (but not more, it'll be too rich). You're cooking this roux to "peanut butter" stage, which is what I picture above; the color looks more like milk coffee to me. It'll take around 10-15 minutes of cooking to get to this color. Now, a lot of cookbooks tell you to stir it continuously the whole time, but I've found that over medium heat that's not necessary; stirring it once every 60 seconds works fine. At least, until you're almost done; then you want to stir it every 20 seconds until it reaches the right color or you may burn it.

One of the great time-saver in this recipe is that, instead of cooking the roux in a separate pan, you fry the aromatics and vegetables in the roux. This includes "smoked mushrooms", an ingredient that The Gumbo Shop makes themselves and I've occasionally found at a farmer's market. You really need these for both smoke and umami. If you can't find them (likely), make your own. Without a smoker, do it by sprinkling 1 lbs of sliced mushrooms with 2 tsp of smoked salt and broiling them until they shrink. If you're not vegetarian, I've found that smoked canned mussels or oysters also work great.

The Creole are also serious about "z'herbes". Traditionally, this gumbo would contain 7 to 9 different greens. I find 4-5 are enough, two of which are parsely and green onions. For the rest, you want savory leafy greens, at least two types from this list (ideally three): collard greens, turnip greens, mustard greens, green cabbage, green curly kale, broccoli leaves, tuscan/lacinato kale. I recommend against red kale, dandelion greens, beet greens, or chard as too strong or too delicate.

Now, there's one last step that's the greatest flavor developer for this recipe: time. If you can, make it a day ahead of time, chill, and reheat. It'll be even better.

Next, make a "peanut butter" roux. In a kettle of at least 2 gallons capacity, heat the oil. Add the flour. Fry over medium heat, stirring frequently until the roux turns what's called "peanut butter" color, but is more like milk coffee. This will take 10 to 18 minutes, during which you need to stir it at least once every 60 seconds, more frequently as it gets closer to its target color.

Add the bell pepper, onions and celery. Fry them in the roux until they soften, about 6 minutes. They will create big clumps in the roux; resist the temptation to add more oil. Add the smoked mushrooms, bay leaves, shallots, and garlic and stir for a minute. Put the greens on top of the fried ingredients. Sprinkle with the seasonings and salt, and turn down the heat to medium-low. Cover until the greens start to wilt, about 5 minutes. Stir up to combine.

Pour in the beans and their cooking water, adding enough additional water to cover. Stir, and simmer for around 30 minutes. Add the green onions and parsley. Simmer for 5 minutes more. Taste, and adjust salt and cayenne.

This even better made a day ahead and re-heated to serve. Serves 12, accompanied by steamed rice and/or cornbread.

Non-Vegan Version: if you are not vegan, you can make this recipe with half the oil replaced with butter (but resist the impulse to use all butter, it's too rich), and replacing the smoked mushrooms with smoked mussels, oysters, or clams. This is the version I usually make.

Small Red Beans are the type you'd use in Red Beans and Rice, little oval beans 1/4" to 1/2" long when dry, also known as "red peas". Kidney beans will not work. If you can't get these, try using blackeyed peas instead.

Smoked mushrooms are a bit exotic. If you can't smoke your own, or buy them, you'll want to substitute. Make some by sprinkling 1lbs of sliced mushrooms with smoked salt and broil them until they shrink. Also swap 1 Tbs of salt in the recipe for smoked salt, or add 1 tsp smoked paprika.

Cayenne Pepper is where most of the "heat" in the gumbo comes from, so decide how much works for you. 1/4 tsp will be barely noticeable; 2 tsp will be spicy. If eating on the mild end of the scale, add a teaspoon of sweet or smoked paprika to give a little flavor.