Pi Day comes at a bad time for making pies; apples are out of season and over the hill, and neither berries nor summer fruit have come in yet. This means that you pretty much need to make your Pi Day Pie of something which is available year-round, such as Oatmeal Pie, or in my case: Key Lime Pie.

Now, I first had key lime pie on Key West itself (in the 70's), and for the four years of childhood I spent in Florida it was my preferred "birthday dessert" for my mother to make. So to say that I am "finicky" and "traditional" where Key Lime Pie is concerned would be understating the case; "passionate" and "fanatical" would be more like it.

In fact, I didn't start making Key Lime Pie in California until growers started producing proper Key Limes in Southern California and Mexico so I could buy the real stuff. Now, there's lots of folks who think it's perfectly OK to make Key Lime Pie using regular Persian limes, and you'll find recipes on the interwebs covering that. Not from me though. Also, a properly-made Key Lime Pie is not green; it's a pale yellow with just a hint of chartruse.

Before you start, please look at the ingredient and equipment list at the bottom of this post, and make sure you have everything there. Also, you have two important decisions to make: (1) whip cream or not? and (2) do you expect leftovers after tonight?

Now, Key Lime Pie is classic Florida colonial cuisine, dating back before the Seven Mile Bridge was constructed, when staples came to the Florida Keys by boat from Charleston or New Orleans. Ingredients came in two varieties: tinned and locally grown. Also, you didn't want to spend any longer in front of an oven than you had to in the tropical heat (which is why baked meringue is not part of the traditional recipe). Key Lime Pie exemplifies all of these requirements, making it perhaps the quinessential Florida dish.

First step is to start making the crust. First, grind up the graham crackers. You're looking for about 1 1/2 cups of cracker crumbs, which with Honey Maids requires most of two packets (2/3 of a box) of crackers. Don't be tempted to substitute healthier, 100% whole wheat graham crackers in this recipe, they won't work right for the crust. Mix 1/4 cup white sugar into the crumbs, and then melt 6 tablespoons (3/4 stick) butter and pour it in. Integrate it using a fork, until the crumbs have an even sticky consistency.

Now, you'll need to press the crumbs into the pie pan. You can do this entirely using your fingers, but I recommend getting two pie plates which nest and using them to create a nice even crust. After that, you need to "blind bake" the crust at 325F for 15 minutes, or 22 minutes if you didn't preheat the oven. This sets the crust and gives it some moisture resistance and caramel flavor. Set the baked crust aside to cool for at least 15 minutes.

While the crust is blind baking, it's time to put together the filling. This requires you to answer the first question, which is "do I want whip cream or not?" If you want to top the pie with a nice thick layer of lightly sweetened whip cream (traditional to the 1855 recipe), then you'll want slightly less filling. If you only plan to have some dollops of whip cream, then you'll want the greater amount of filling. Yes, I know this means using half a can of condensed milk; it can't be helped.

Combine the egg yolks and condensed milk. Zest three or four of the key limes into the bowl; this should be a couple teaspoons of zest. Beat the mixture together. Now comes the hard part: juicing all of those little limes. You'll need to juice 18 to 25 of them to get 1/2 to 3/4 cup of juice, so don't even try this recipe unless you have a good squeeze juicer or reamer. 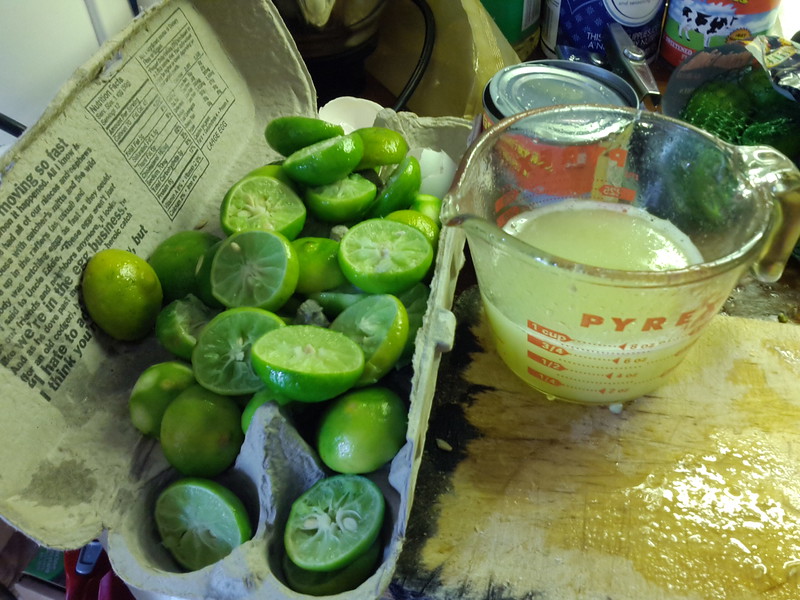 That's a lot of tiny limes!

Next, to paraphrase Ben Grimm: "It's clabberin' time!"

Strain the lime juice: it has lots of tiny seeds, and don't make the mistake I did once but instead use a plastic strainer since lime juice is very hard on steel. Then pour it into the bowl and whisk together. What you're creating here is a "clabber", where the lime juice, milk and eggs will chemically react togehter to form a stiff gel, even without baking. You can imagine how this was an attractive idea in the South Florida heat. So just set aside the clabber in the bowl to thicken for 30 minutes.

You need to make your second decision now. If you expect to serve out the entire pie tonight and have one slice or less left over, you don't need your oven again. The pie will gel in the fridge and be servable as-is. However, if you plan to serve it the next day or later, or you expect leftover slices through the week, or if you're just nervous about raw egg yolks, you need to par-bake the pie to make the clabber hold when saved. Otherwise, the pie will start to "weep" when it's only a day or two old, and by the end of the week will be a mushy, sticky mess.

If you're doing the whip cream thing (I don't), you'll whip the cream with a little sugar, and then add a thick layer of whip cream, or just a bunch of fat dollops, to the top of the pie when you take it out of the fridge for cutting. Either way, slice and serve cold.

Whip filling ingredients together; set aside to thicken for 30 minutes.

Pour filling into crust. Bake at 325F for 15 minutes. Cool, then chill in the fridge for at least 2 hours.

If serving with whip cream, whip the cream into soft peaks, then sprinkle with sugar. Whip for another 30 seconds. Top pie with the whip cream.