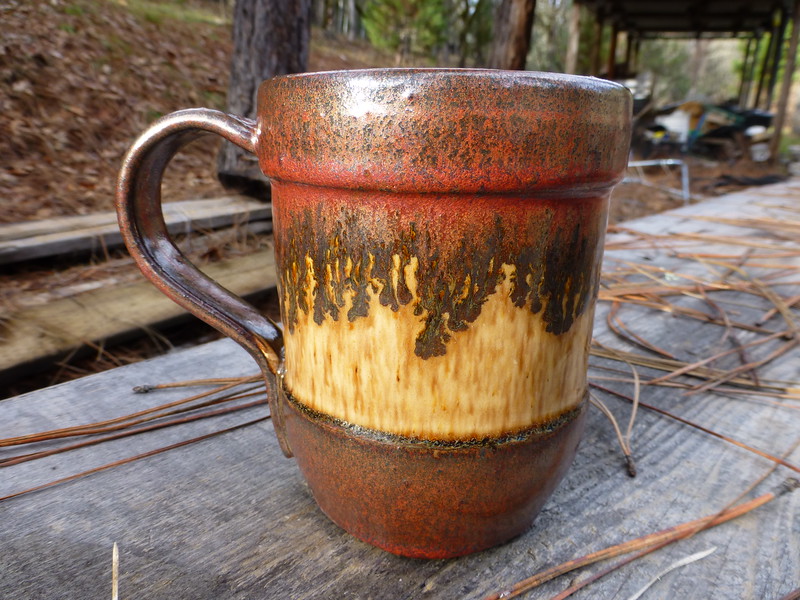 Meet "Lava Street", my newest favorite glaze. This was originally called Orange Street and I got it from the Ceramic Recipes group on Facebook. I've renamed it after adjusting the formula, since on my ware and with my stuff it looks more like lava. Above is Lava Street over Faux Fur, which does a kind of mocha diffusion.

I love it, but it needs more testing.

For example, if I want to use a glaze on eating ware, I need to test it for leaching, to make sure it won't poison my customers and friends. I say "leaching" rather than "food safety" because the FDA has been rather cavalier about standards for ceramic food safety, making the term meaningless. Whereas leaching specifically refers to the tendency some glazes have of letting toxic metallic oxides bleed into your food or drink, something we don't want.

I do have glazes which leach out, and use them exclusively on decorative pieces or on the outsides of pieces and not on any surfaces expected to come in contact with food or hot liquids.

Now, the really scientific way to test for leaching would be to send out samples to a chemistry lab. But as an artist, I can't afford that. Fortunately, there are some household tests which work pretty well; in fact, I use a four-fold method to determine if a glaze is "safe".

The most toxic chemicals used by potters in glazes today include barium, manganese, and uranium. Somewhat less toxic, but still a problem if they leach into food, are other chemicals like copper, cobalt, chrome, and nickel. This glaze contains none of the chemicals which are marked for special attention to prevent leaching; the large amount of iron it has is fairly harmless even if it does leach.

In order to be sure we're not going to leach, we want to make sure that we'll have a good amount of silica melted into glass to hold all of our other chemicals. So the Silica:Alumina ratio is one of the things you want to check for a safe glaze. 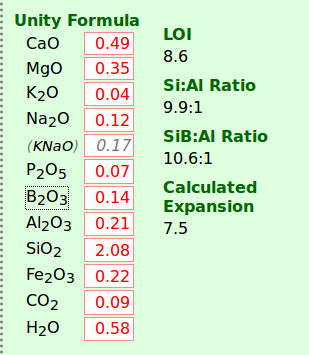 So here we have a Silica:Alumnia ratio of 9.9:1, which is high in glass. Unity test: passed.

One thing which can cause leaching into food is acids. Lemons are one of the most acidic things you're likely to have around the house. So a standard testing technique is to put wet lemon slices on a test tile, like so:

Cover to keep moist, and leave for a couple of days. Then lift off the lemon slices to see if the glaze is marked or discolored; such would indicate leaching or other issues. Results?

Oh, and apparently Lava Street does really well on tiles with impressed designs.

We also want to test vulnerability to alkaline substances, and hot liquids. We can do both at the same time in the dishwasher. Take two test tiles fired together so that they're nearly identical. Put one in the dishwasher like so:

Then run it through for 5 to 10 cycles. And if the holiday season is good for anything, it's the opportunity to run a lot of dishwasher cycles in a short time. Seven cycles later, let's look at the result:

Can you tell which one went through the dishwasher? I've asked three other people, and most of them got it wrong. So, Dishwasher Test: Passed.

I can now be confident that by using Lava Street on my dinnerware, I'm not poisoning my customers. Which makes me very happy, because I love the glaze and want to use it inside and outside my pieces.

Now, I just need to do something about its tendency to run when layered over other glazes. I had to spend some time grinding down the foot of this mug.

All ware and test tiles above are on Leslie's Vanilla stoneware, fired to Cone 7 in oxidation, using a simple medium-fast cone fire program with a 10 minute hold