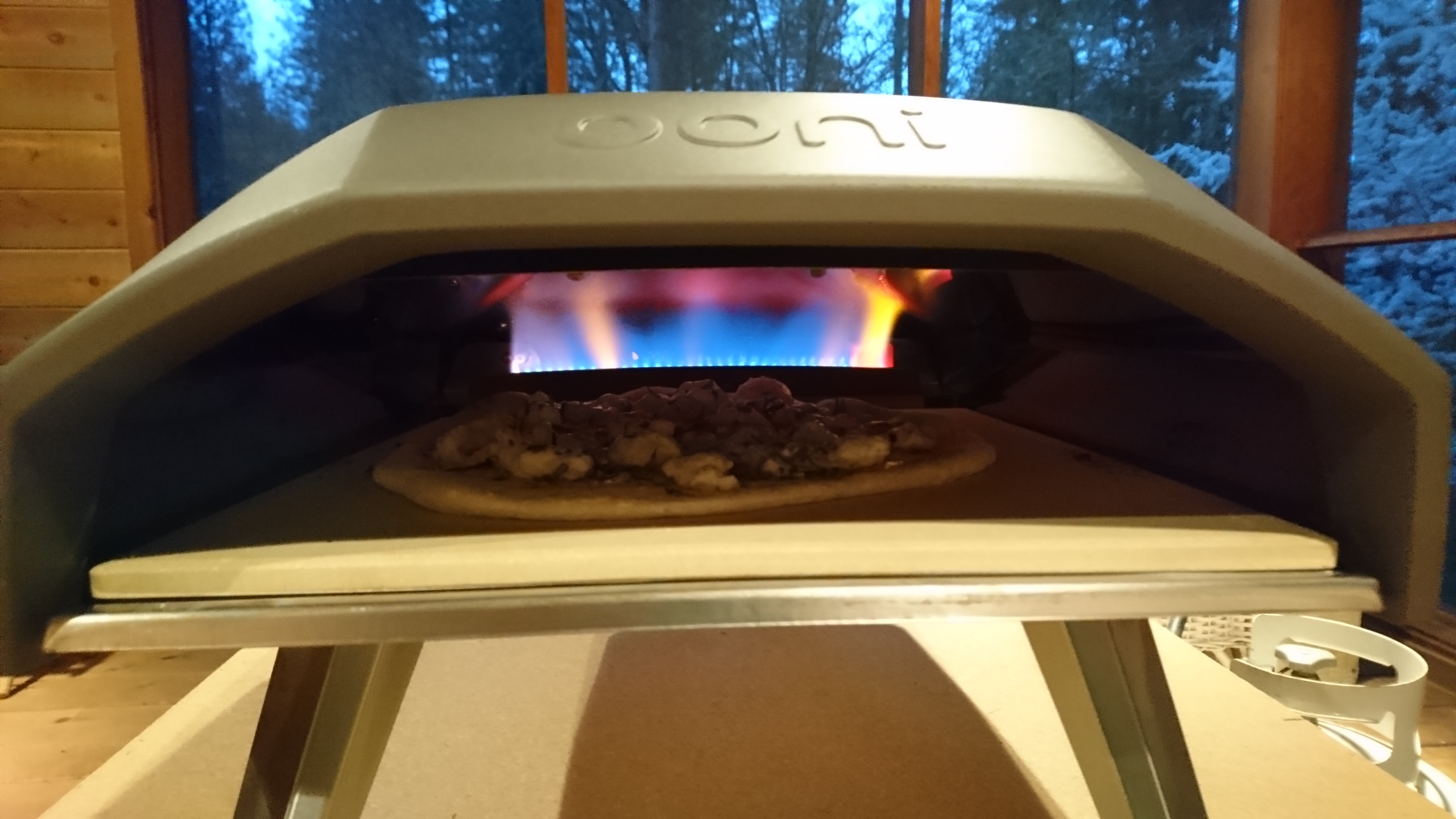 I've messed around with various ways of making pizza on the grill for the last couple of years with unsatisfactory results. So when kickstartered pizza maker Ooni announced the Koda, their new super-simple gas-only portable outdoor pizza oven, I preordered one. Here's my first report on its performance.

First, they're not kidding about the Koda being portable. There's no chimney, the oven's legs fold up, and the whole thing weighs less than the gas tank you use to fuel it. I've ordered a carry-case now and expect to bring this to pizza parties at friends' homes.

There's a cost to that portability, though. First, you have to find a table to put it on; I'm going to build one out of scrap for the backyard. Second, the baking surface is a 12" square, and you really want to make your pizzas a no more than 9"-10" in diameter to keep the crust away from the flame and front edge. You also need a suitably narrow pizza peel, preferably a steel one so it doesn't catch fire.

I preheated the Koda for about 1/2 hour. It did not get up to the reported 950F, but it easily got up to 800F -- possibly because I was using it on a porch where it was 48F out. Anyway, 800F is plenty hot enough for some serious pizza.

So I popped in a "winter margarita", with buffalo mozzarella, pesto, and roasted tomatoes left over from last summer. I'd used my standard pizza dough recipe, which turned out to be a mistake (more about that later).

The pizza cooked fast at that heat. Too fast, in fact; it started to burn along the back edge. And by "burn" I mean "bright yellow flames". I quickly pulled it out, and then started to rotate it to get the rest done. The whole pizza was done in about 3 minutes. 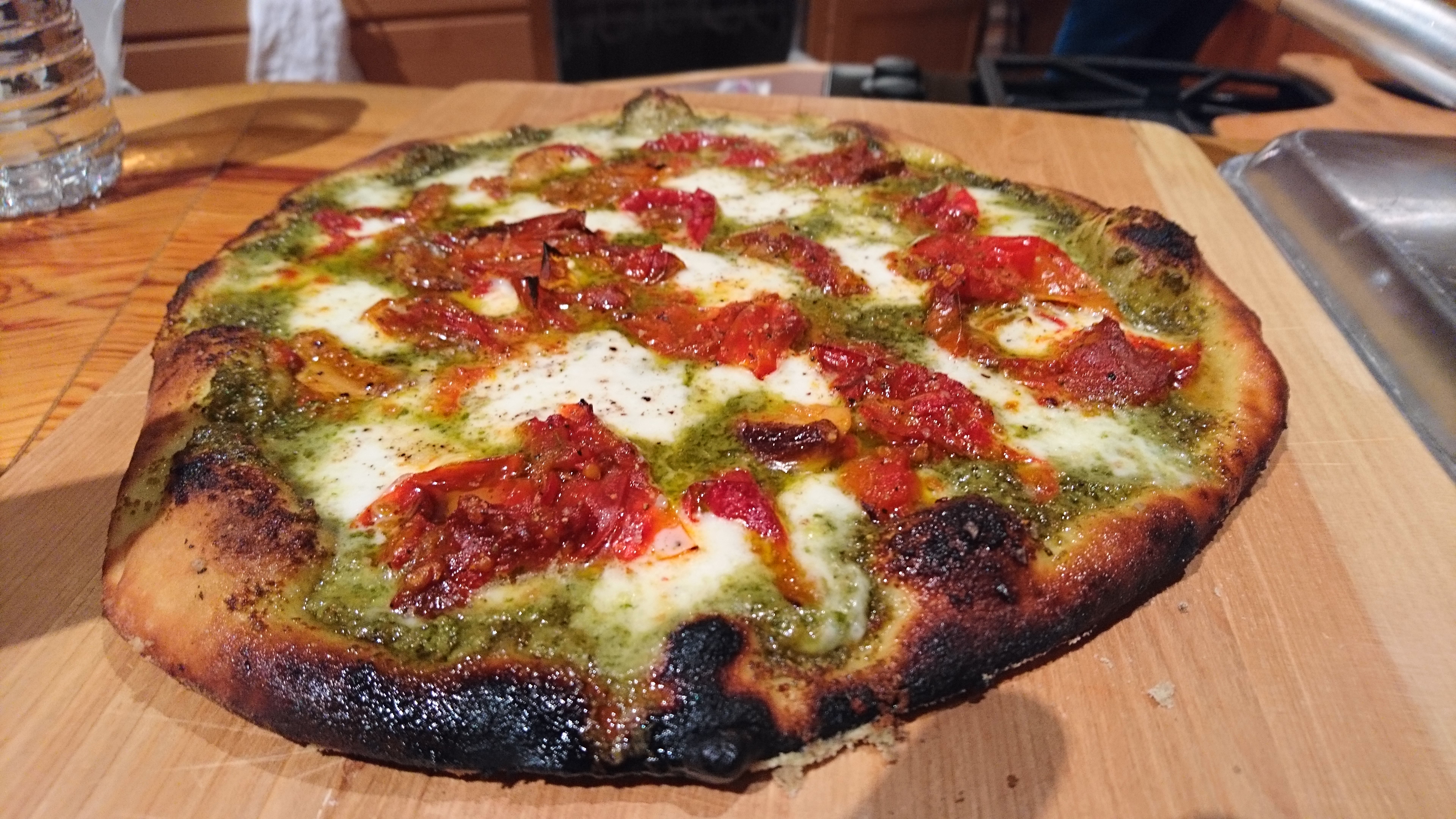 Over the next 5 pizzas I made I learned a bit how to deal with the Koda. First, crank the heat between pies, but then turn it down when inserting the pizza. Second, rotate that pizza as soon as you can, and keep spinning it. If you have thick toppings, it can also help to finish them against the top of the oven. The other pizzas I made included:

Of these, the mozzarella/rosemary was the biggest hit. I baked all 6 pizzas in less than an hour, taking a break between the first and second three.

Through this I continued to have a problem with the back edge burning. Part of this was my fault due to the dough recipe; apparently doughs with sugar or honey in them are a Bad Idea at 800F and tend to burn. However, the Koda also has a pretty serious temperature dropoff between the back of the oven and the front, like 250F difference. This really isn't that surprising considering the Koda's design, but it does mean that pizzaiolos need to keep the pizza spinning, as much as possible.

Fortunately, one thing Ooni has is a friendly, super-pizza-geeky community on Facebook who were all-too-happy to speculate and advise on how I could do better next time. I'll also experiment with a thicker pizza stone and other tweaks.

Overall, though, I am very pleased with my purchase. The Koda makes superior pizza, and is certainly the best pizza oven you can get for $300, as well as the most portable and the simplest to operate. I expect many pizza-making nights this summer, and I'll try naan and kachapuri in it too.