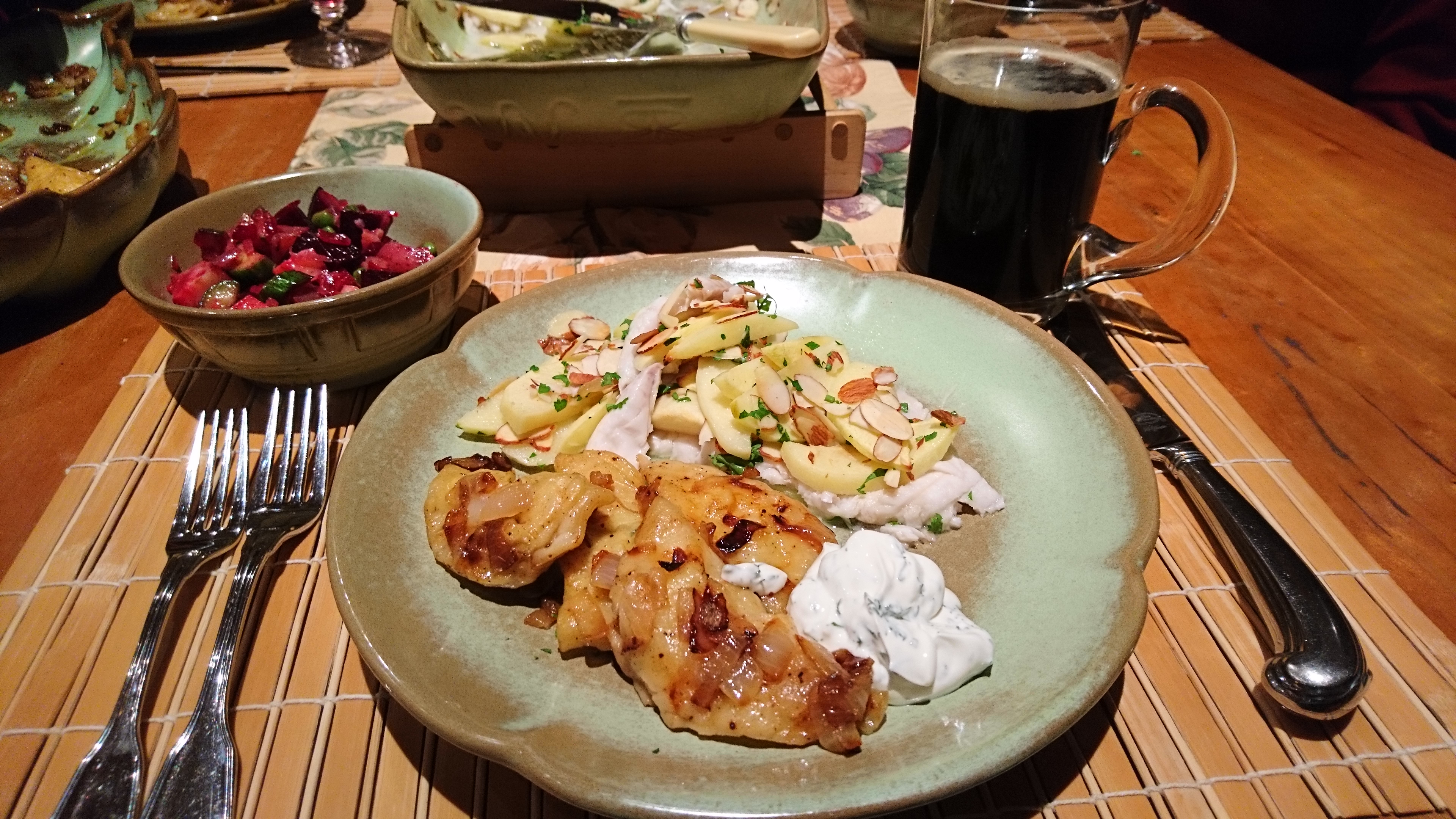 Once stuffed with the zakuski, the family retired while I finished cooking the main course. They were fine with the half-hour break, since there had been so many zakuski. 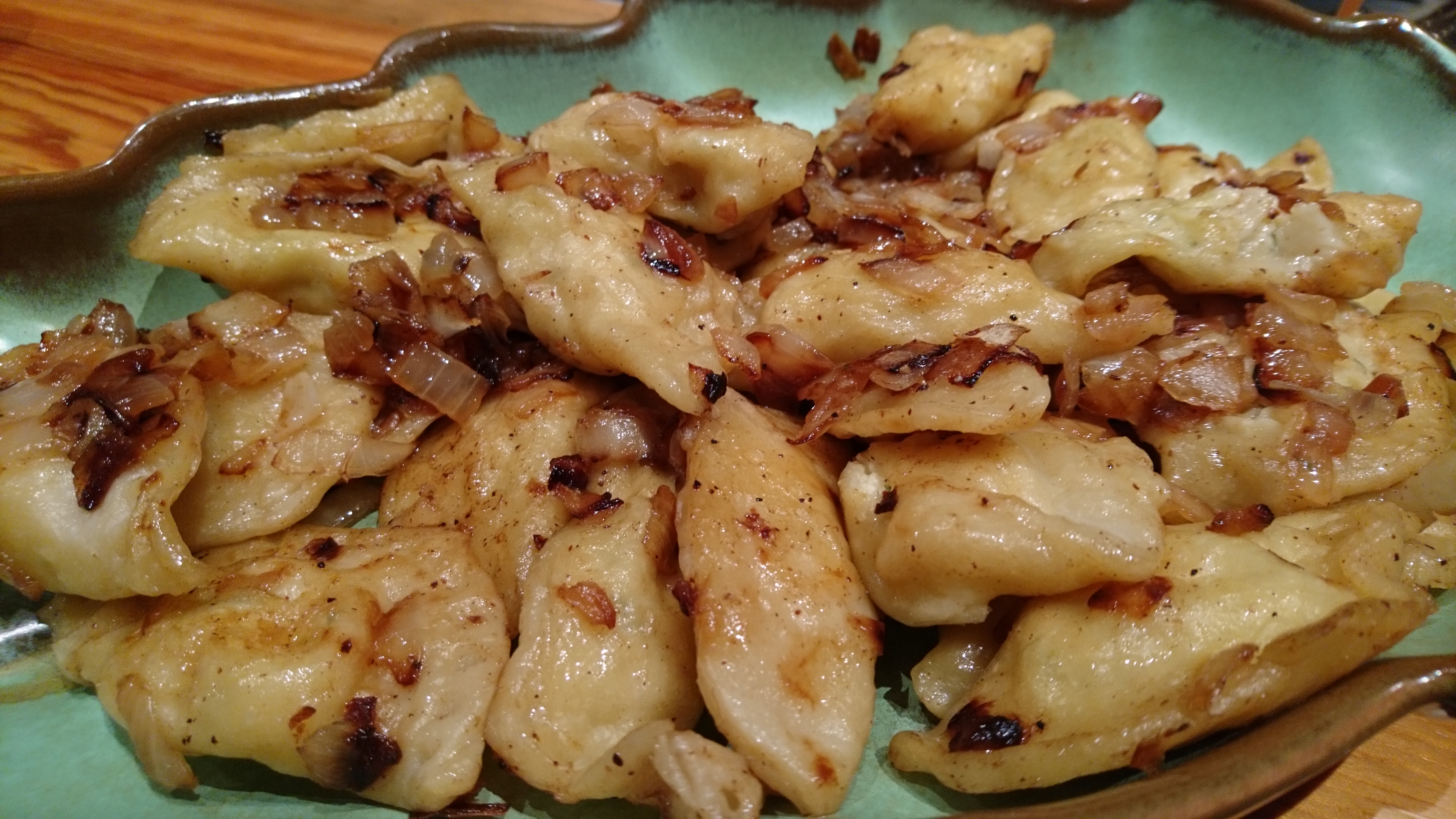 Of course, we had to have varnyky. Or is that pirogi? As far as I can tell, these dumplings are the same, even having mostly the same fillings. The name just changes depending on which country you're in (varnyky in the Ukraine, pirogi in Poland, and either in Russia). Regardless, they're delicious, and an absolute requirement for any serious Russian/Polish/Ukranian meal. The ones in the picture are filled with a potato, onion, and twaróg cheese mixture, and then tossed with butter and browned onions. The recipe was mostly from Please to the Table, but I made some modifications.

I'll do full instructions, with pictures, on how to make varnyky later. 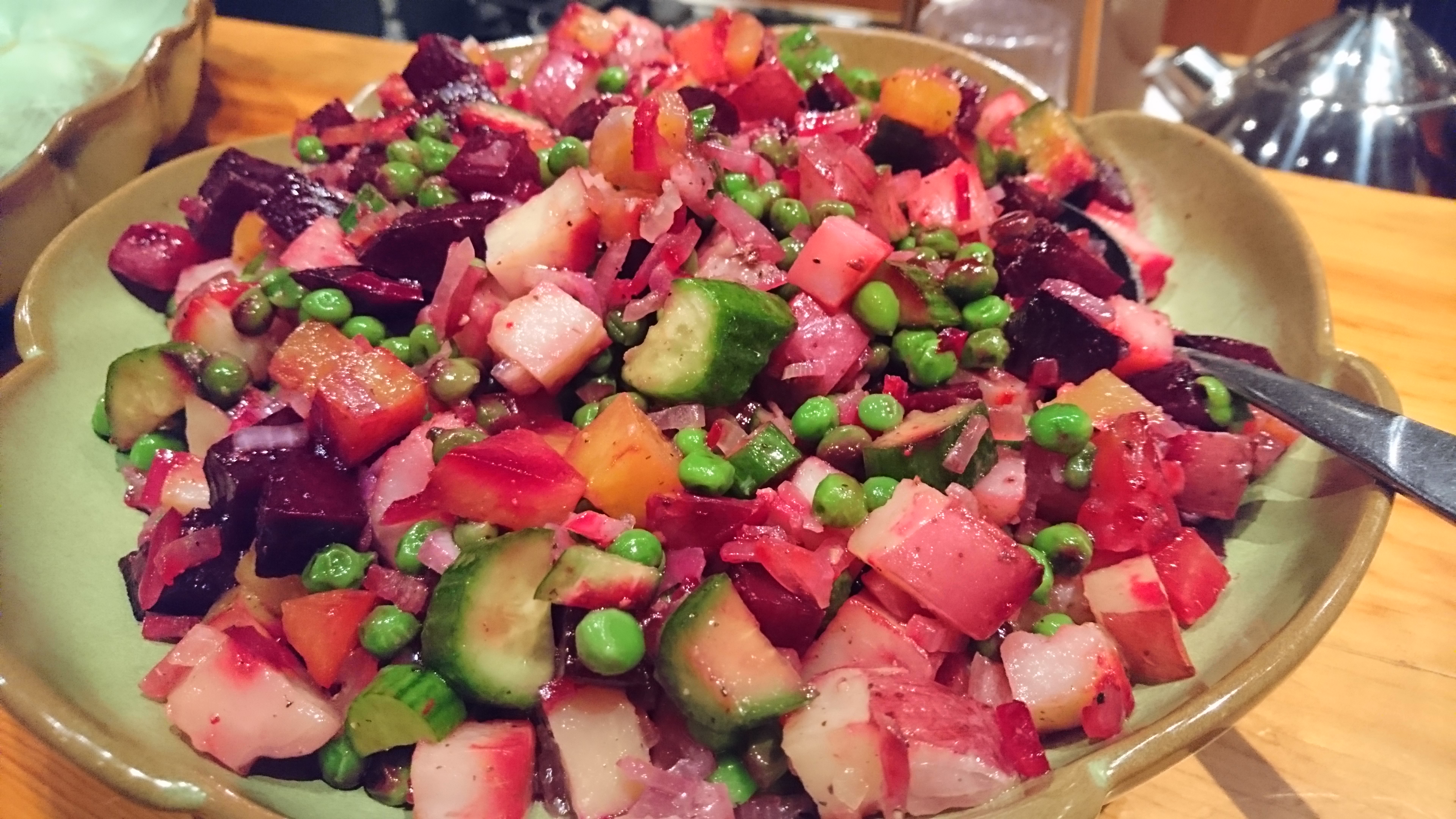 We also needed some nutritional balance to the meal, so I included a beet, cucumber, and potato salad from Mamuska, with both red and golden beets. This was excellent, although I recommend adding the red beets in last or everything in the salad turns a muddy red. 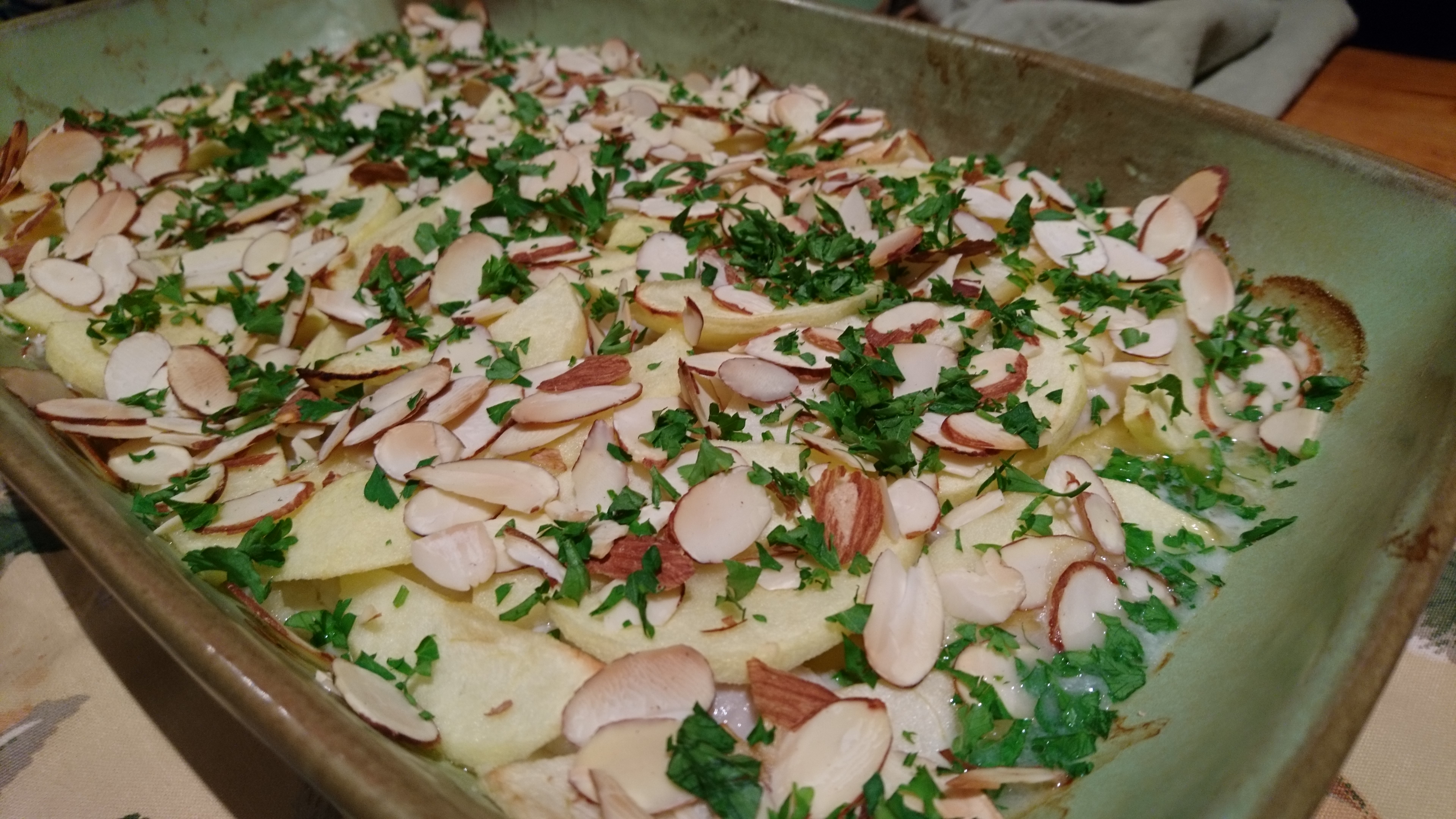 To make it a festive meal, I wanted to have a fish dish, but nothing too complicated. A Pomeranian (the province, not the dog) flounder dish from Polska seemed perfect. However, the dish required a whole flounder, which was out of the question (actually, not, but see the footnote to this post), so I had to make it with about 1.5lbs of "Dover" sole filets. This let me adapt the dish to use more apples, and become kind of a fish casserole. See the recipe at the bottom of this post.

We served all of this with dark beer, rather than wine. I really don't care much for Russian taste in wine, which tends towards sweet reds. But Russian-style beers are terrific. These were Oregon beers, though: a porter and a dark lager. 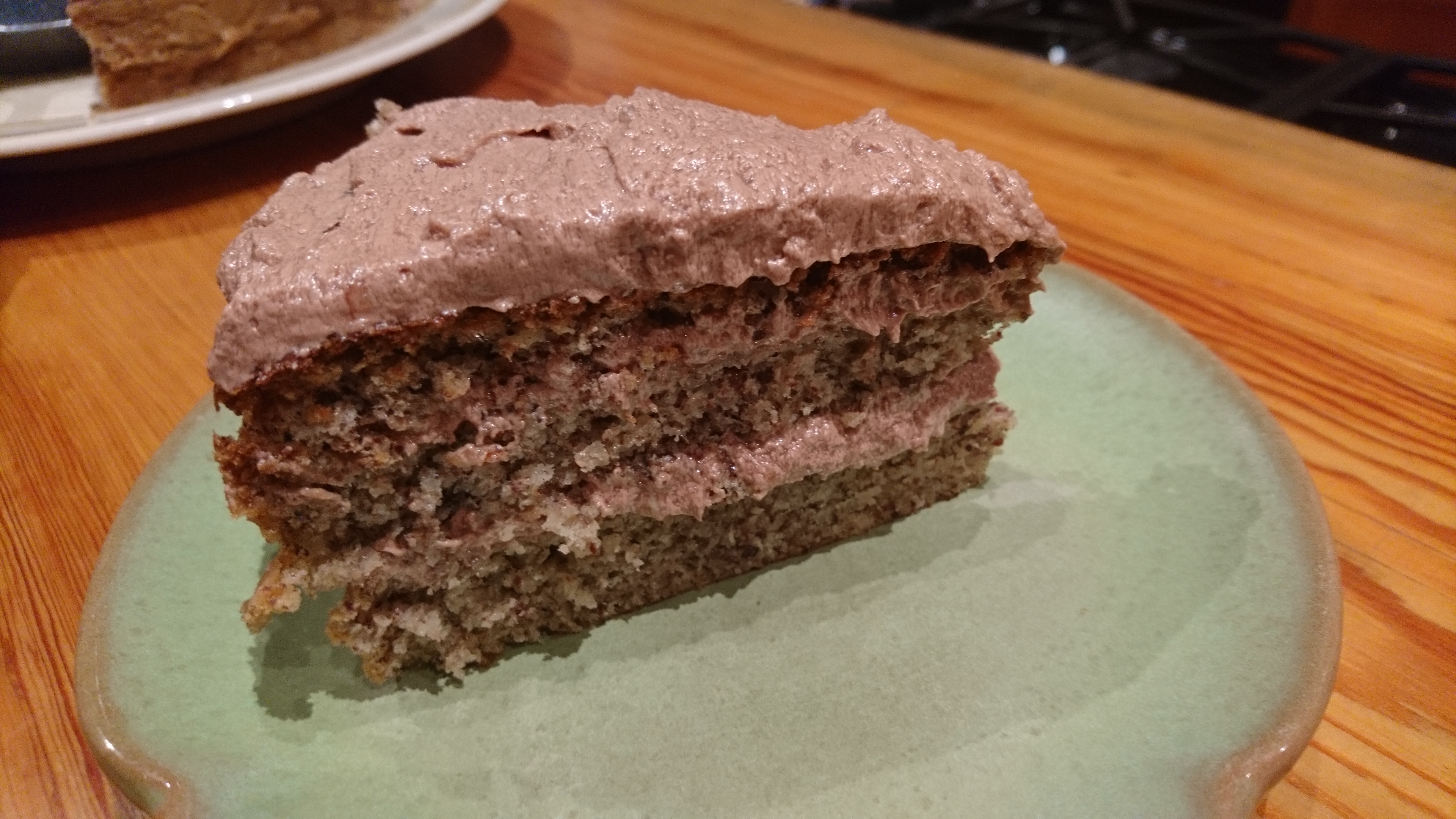 Finally, dessert: a hazelnut layer-cake. This recipe comes from my sweetie's family friend Vera, who has it from her Russian family. It's a cake made from ground hazelnuts and egg whites, with "boiled" chocolate frosting. With a different frosting and a minor tweak, the cake could be gluten-free. Regardless, it was delicious and really rich ... the perfect finish to a Russian/Polish Thanksgiving!

Now, what cuisine should I do next year? Leave your ideas in the comments.

based on a recipe from Polska

Heat the oven to 375F. Melt the butter. Toss the apple slices with 3 Tbs of butter and the lemon juice as soon as you've peeled and sliced them (otherwise they'll turn brown). Create a single layer of apple slices in the bottom of the baking pan; you'll have to place them with your fingers. Bake the apple slices for about 12 minutes, you want them to cook and maybe even sizzle a little.

Meanwhile, coat the fish filets with 3 Tbs butter. When the first layer of apples are done, take out the hot pan, and carefully create a layer of fish on top of the apple slices, overlapping the filets if they are thin. Sprinkle lightly with salt and pepper. Cover this with a single layer of apple slices, which should use most of the rest. Season with a little more salt and pepper. Pop this back in the oven for 10 minutes.

After 10 minutes, sprinkle the top of the casserole with the sliced almonds, covering about 40% of the apples. Push back in the oven and cook for another 10 minutes. If your oven has a convection function, use it for this portion of the cooking. Remove from the oven and sprinkle with parsley. Serve hot, and do not reheat. Serves 4 to 6.

Warning: do not make this dish, or anything, with the fish sold as "arrowtooth flounder". While legitimately a flounder, the arrowtooth has an enzyme which causes its flesh to disintegrate when cooked. This is also an important lesson in having backup fish in the freezer whenever you make recipes with a strange fish.