It's St. Patrick's Day, which of course makes you think of ... pasta?

Well, apparently it does if you're Costco. In honor of St. Patrick driving the snakes out of Ireland (in a green minivan, presumably), Costco has provided us with luridly green ravioli stuffed with Irish cheddar. Which my sweetie bought. 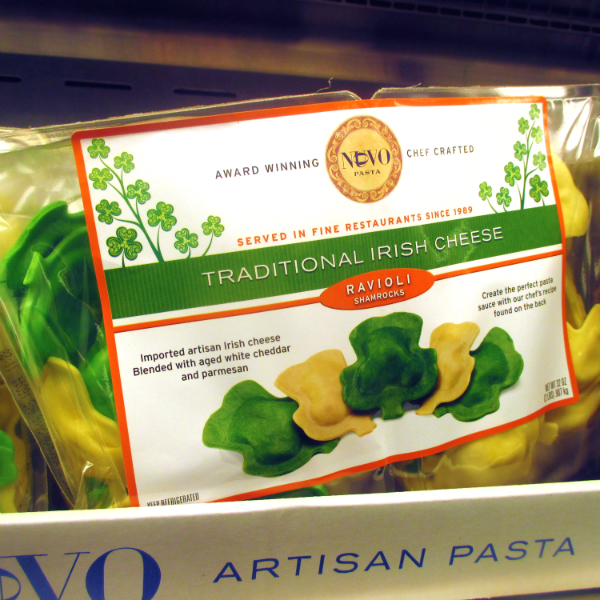 The back of the package has a recipe for "Irish vodka sauce," which was the most preposterous thing I'd ever heard of. What could I dress these with without using cabbage or dulse or corned beef?

Based on a trip to Safeway I came up with this, mostly celebrating springtime and green things rather than anything particularly Irish. If you have a recipe for corned beef and cabbage sauce, you can leave it in the comments.

Heat up a big honkin' pot of salted water, preferably with a strainer insert or basket, until it simmers. Put the new potatoes in it and parboil them, around 7 minutes. Lift them out of the water (or scoop them out if you don't have a strainer insert), and put the water back over low heat. Drain and blot dry.

While the potatoes are parboiling, put the butter, olive oil, and sliced garlic in a large, deep saucepan (I used a 14" one with 2" sides). Heat medium-high, until the butter melts and the garlic starts sizzling. Add the leeks and cook until just limp, around 3 minutes.

Add the potatoes and the asparagus. Cook, stirring occasionally, for about another 3-4 minutes. Add the thyme and pour over the wine. Put a lid on the pan and let the vegetables steam for 2 minutes. Remove the lid and reduce heat.

Put the ravioli in the big pot of water, cook for two minutes, and drain, reserving 1 cup of the pasta water. Add the ravioli to the pan of ingredients, and mix together. Add enough pasta water to make everything damp and saucey.

Add salt and pepper to taste, and serve. Pass grating cheese at the table.