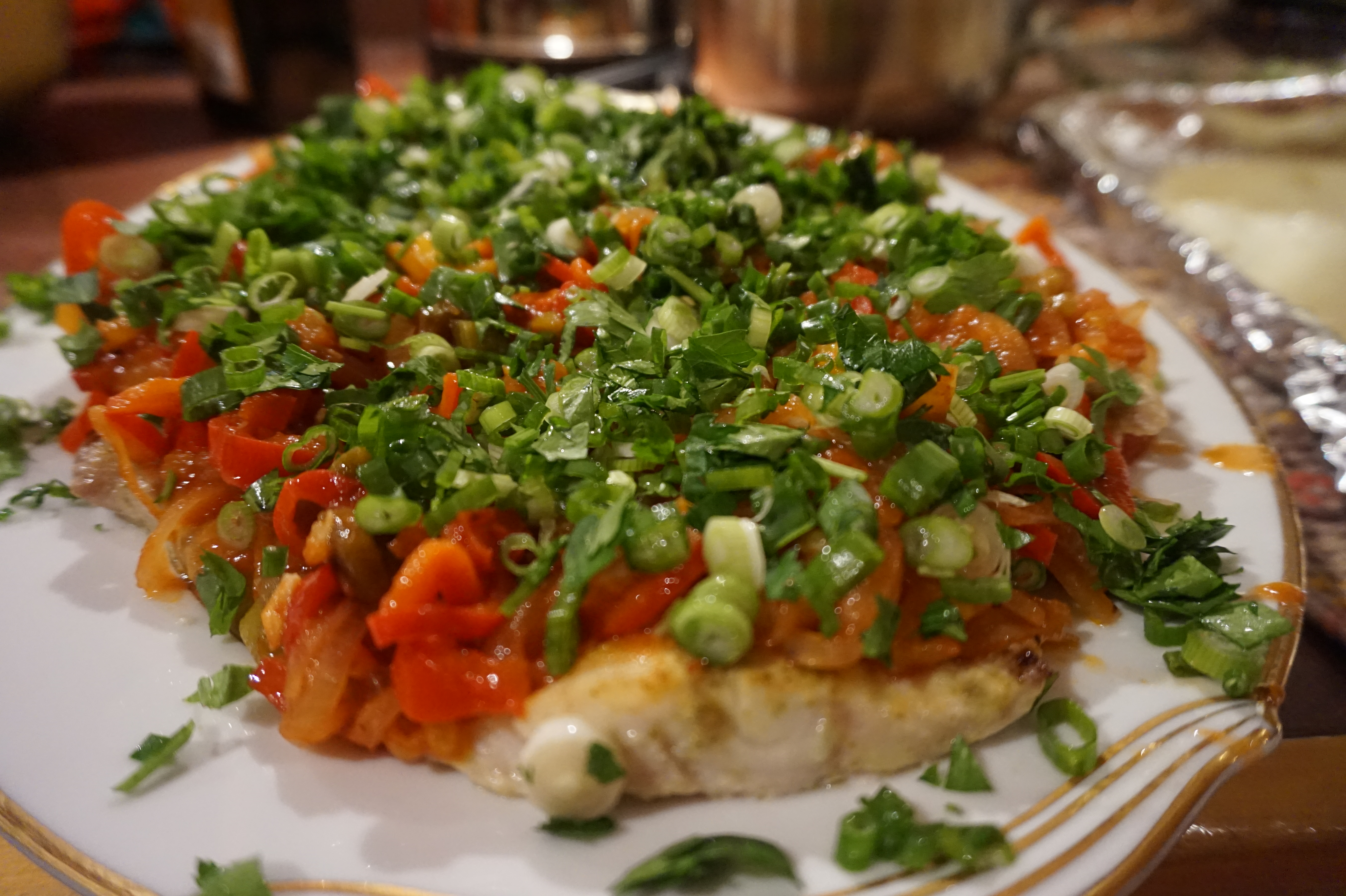 Having finished the appetizers and salad course we moved on to our main course. Now, the super-traditional Christmas eve dinner for Cuban-Americans is Lechon Asado (roast pork shoudler), with rice and black beans, and I had to have all of those things, and you'll see them in a minute.

What you're seeing above, though, is the fish dish, because I may cook pork, but I haven't started eating it, so I wanted some fish for me at least. Now, the recipe I had was for baked grouper with peppers, green onions and cilantro, but grouper isn't a fish you can get on the West Coast so I used sole instead. 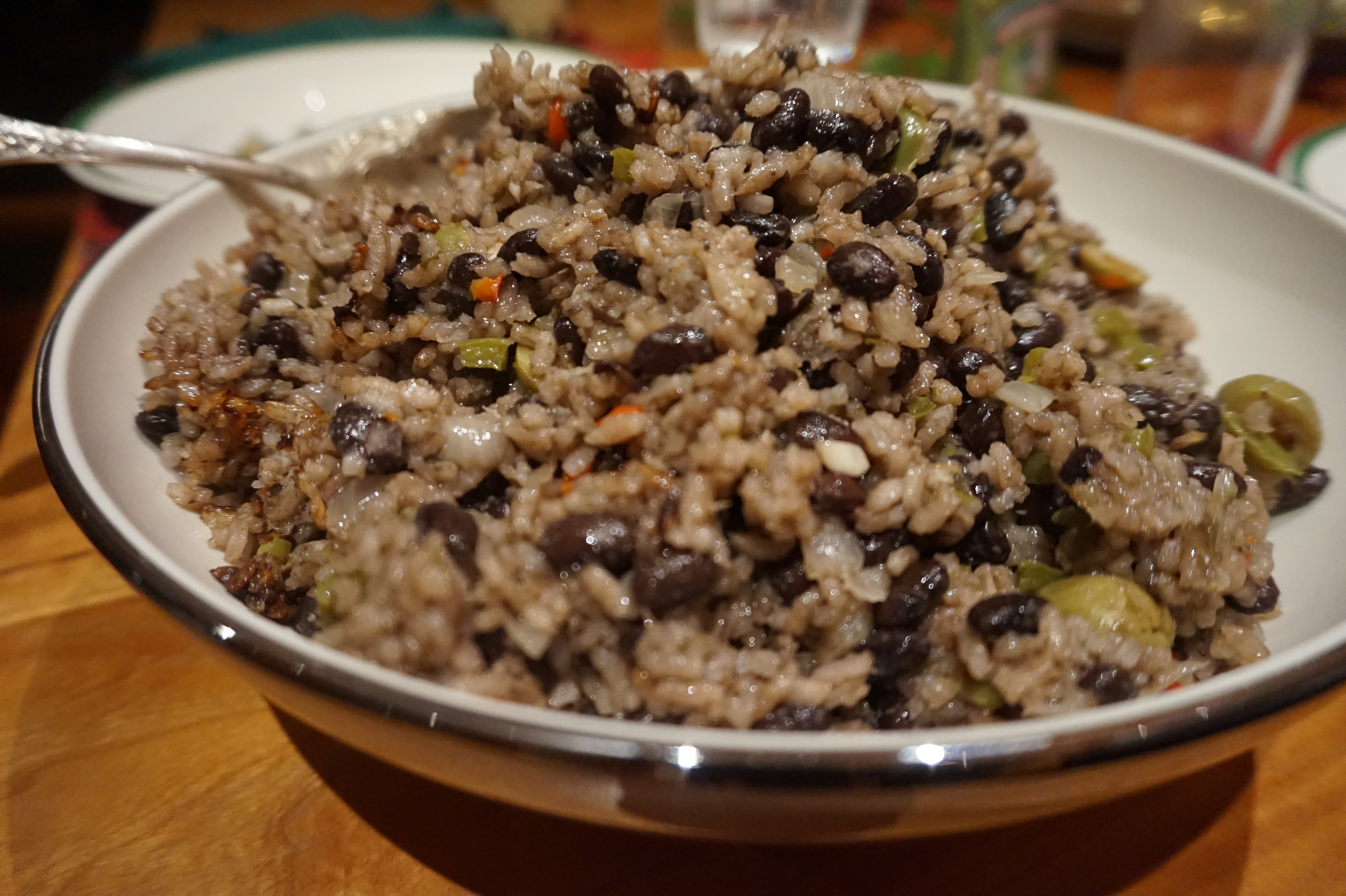 Now, I did say beans and rice, didn't I? Yes I did. And in my opinion, there is no better way to eat black beans and rice than to combine them in the form of moros y christianos where the rice and beans are cooked together. Yes, this dish does have the rather insensitive name of "Moors and Christians". It's traditional, deal with it. It's also tasty, and almost a meal in itself.

However, there's still the pork. The pork I spent two and a half days making. You ready?

Now, as you know I don't exactly cook a lot of pork. Heck, I don't cook any, since I don't eat it. So I turned to my Cuban friend Alina for advice, and she helped me out with a recipe for Lechon Asado, the traditional Cuban pork roast. 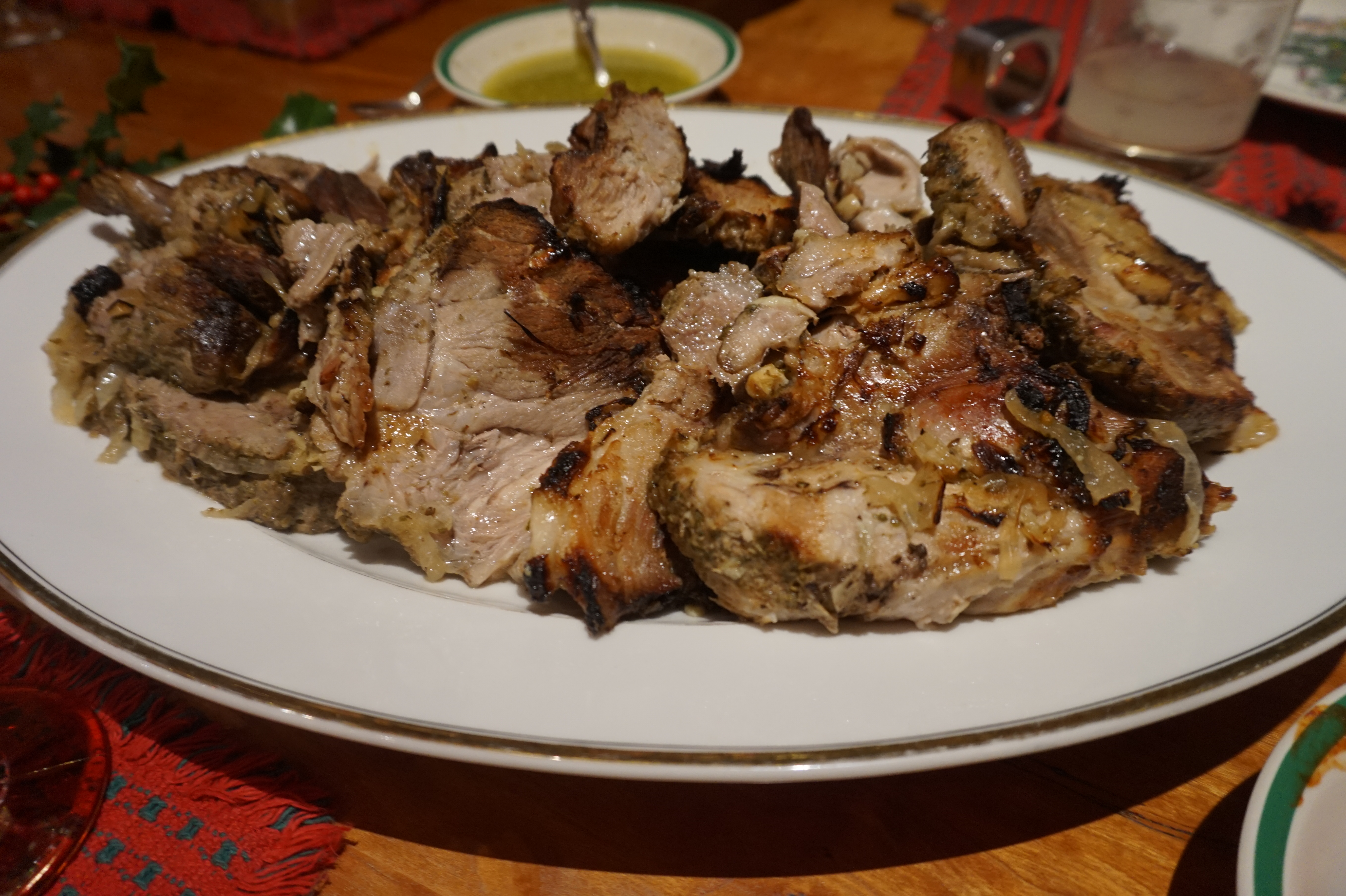 Alina's recipe lays out for you how to make proper Lechon Asado, so I'm just going to give you my tips and modifications.

First, I only used 5lbs of pork, because that's still a ton of pork and it was more than too much for 8 people. Second, I used a lot more garlic, like two whole heads, so that I could poke 30-40 half-cloves deep into the meat. I had two thoughts here; one was that, well, I like garlic, and the other was that more holes in the pork would help the marinade reach more of the meat.

Now, the traditional marinade that Alina gives you is made from sour orange juice (naranja agria), and while folks offer various substitutes for this, you really don't want to swap it out. Order it online if you don't have a good Latin market in your area. Since the Badia sour orange is a bottled product, it lacked acidity so I added a bit of lemon juice to it. I also used the sour orange juice in the mojo de ajo sauce I made to go with some of the other dishes.

Next, I marinated the pork in a giant plastic bag, which was much easier than trying to fit a roasting pan into the already crowded-fridge, and made it easy to flip the meat over for even marination. Since this was a smaller pork roast, I "only" marinated it for a day and a half. You really need at least a day for this recipe to work, and up to three days is better.

Then roast for 4 hours, let rest, slice, and broil. The guests told me it was fantastic; I had to take their word for it. 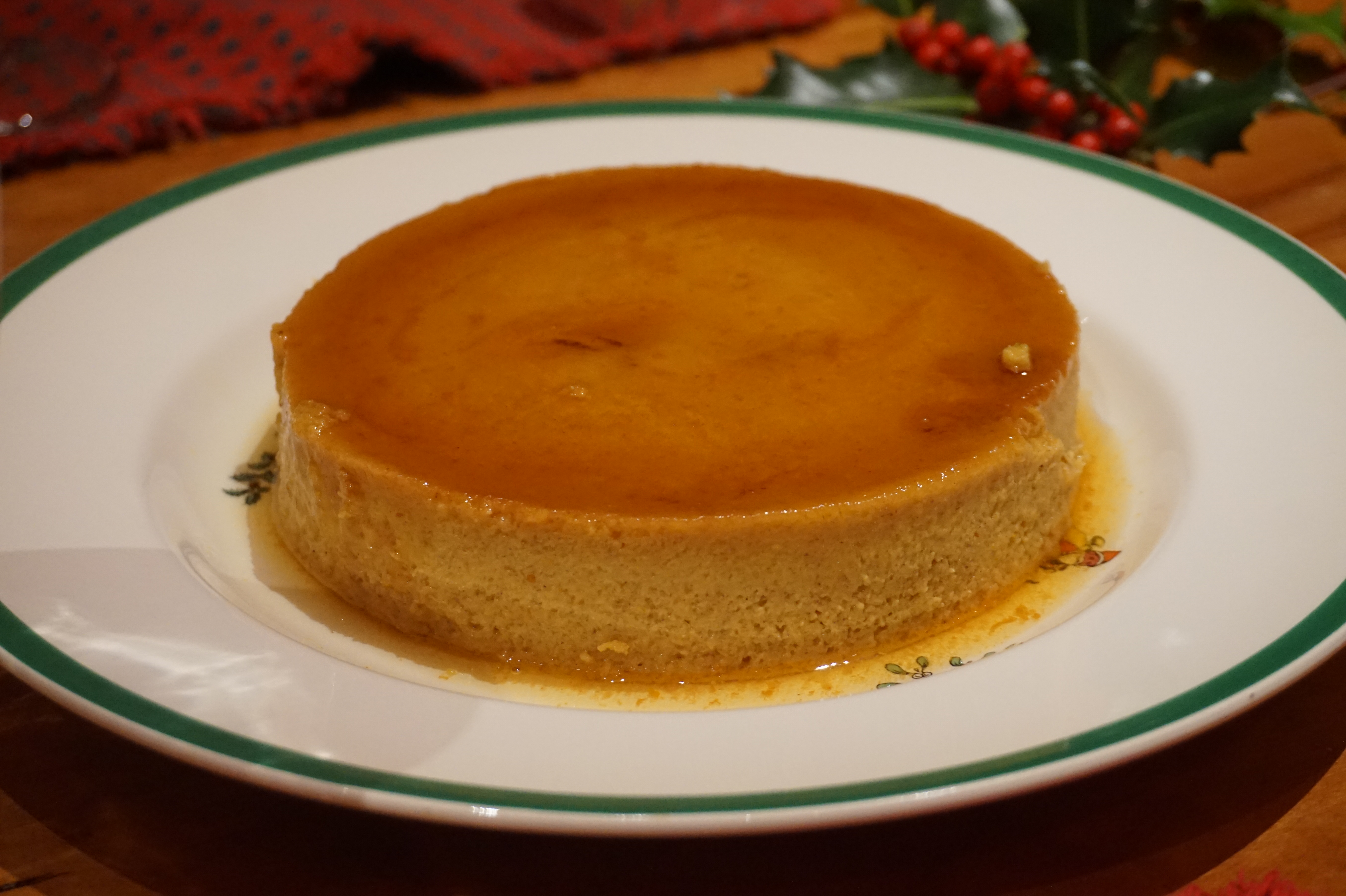 Dessert, of course, was proper flan. Because what else would you make with a Cuban meal? We did have a bit of a start because the caramel in the bottom of the flan cups crystallized, but that actually turned out not to matter at all. It re-caramelized in the oven.

So that was last year's Cuban Christmas eve. Hopefully it inspired you to try something a bit more adventurous for your own holiday meals.

As for this year ... I'm doing Belgian food. Watch this feed for that!