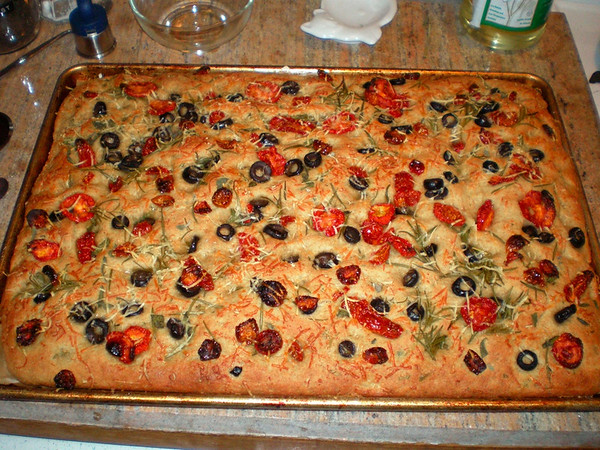 This is another of my "easy baking" recipes, mostly because it doesn't require much kneading, and it's hard for it to fail on you. The oil makes sure it's tender, and the flat shape limits a lot of potential rising problems.

Depending on how much you use in the way of toppings, this bread can either be a side dish, or can be a lunch in itself, particularly with a small salad or a bowl of soup. Serves 6-10 people depending.

Chop half the rosemary roughly and bruise it in a mortar (or mince it). Put it in a large mixing bowl, and pour the cup of boiling water over it. Dissolve the honey in the water. Let sit 10 minutes. Add the cup of lukewarm water; the mixture should now be just warm. Be careful it's not warmer than 90F, which would kill the yeast -- test against your wrist to be sure. Add the yeast, stir to dissolve, and let sit another 5 minutes.

Stir in the salt and two tablespoons olive oil. Add the whole wheat flour, stirring in 1/2 cup at a time always in the same direction, until completely mixed. Add about 2 cups of bread flour in the same manner. Then add flour until the dough just holds together and can be kneaded. Knead gently for 5 minutes, adding just enough flour as necessary to keep it from sticking. Form into a ball, oil the ball on all sides, and put it in a rising container in a warm place for 1 to 1½ hours, or until doubled in size.

Line the bottom of the baking sheet with a sheet of parchment and oil it. Punch down the dough and turn it out onto the sheet; using your fingertips, press it out gradually until it covers the whole baking sheet (a rolling pin will not work). Cover with lightly oiled plastic wrap, or a damp towel, and let rise for another 30 to 45 minutes.

While it's rising, heat the oven to 375F. Dimple the top of the focaccia all over with your fingers; drizzle it with 2 to 3 tablespoons oil, sprinkle on the remaining rosemary, and scatter optional toppings sparsely across the surface (this isn't pizza). Bake for 20 to 30 minutes, just until it turns golden brown. Cut into slices and serve.